Silica gel is an amorphous and porous form of silicon dioxide (silica), consisting of an irregular tridimensional framework of alternating silicon and oxygen atoms with nanometer-scale voids and pores. The voids may contain water or some other liquids, or may be filled by gas or vacuum. In the last case, the material is properly called silica xerogel.

Silica xerogel with an average pore size of 2.4 nanometers has a strong affinity for water molecules and is widely used as a desiccant. It is hard and translucent, but considerably softer than massive silica glass or quartz; and remains hard when saturated with water.

Silica xerogel is usually commercialized as coarse granules or beads, a few millimeters in diameter. Some grains may contain small amounts of indicator substance that changes color when they have absorbed some water. Small paper envelopes containing silica xerogel pellets, usually with a “do not eat” warning, are often included in dry food packages to absorb any humidity that might cause spoilage of the food.

‘Wet’ silica gel, as may be freshly prepared from alkali silicate solutions, may vary in consistency from a soft transparent gel, similar to gelatin or agar, to a hard solid, namely a water-logged xerogel. It is sometimes used in laboratory processes, for example to suppress convection in liquids or prevent settling of suspended particles.

In many items, moisture encourages the growth of mold and spoilage. Condensation may also damage other items such as electronics and may speed the decomposition of chemicals, such as those in vitamin pills. Through the inclusion of silica gel packets, these items can be preserved longer. It may aid the drying out of electronic equipment during attempts to restore items that have been exposed to moisture accidentally.

Silica gel may also be used to keep the relative humidity inside a high frequency radio or satellite transmission system waveguide as low as possible (see also humidity buffering). Excessive moisture buildup within a waveguide can cause arcing inside the waveguide itself, damaging the power amplifier feeding it. Also, the beads of water that form and condense inside the waveguide change the characteristic impedance and frequency, degrading the signal. It is common for a small compressed air system (similar to a small home aquarium pump) to be employed to circulate the air inside the waveguide over a jar of silica gel.

Prior to widespread use of air-conditioning, salt shakers with caps containing silica gel beads to keep the salt dry enough to prevent clumping were marketed in the USA, replacing the practice of including a few grains of rice in salt shakers to effect the same drying.

Silica gel is sometimes used as a preservation tool to control relative humidity in museum and library exhibitions and storage.

The hydroxy (OH) groups on the surface of silica can be functionalized to afford specialty silica gels that exhibit unique stationary phase parameters. These so-called functionalized silica gels are also used in organic synthesis and purification as insoluble reagents and scavengers.

Chelating groups have also been covalently bound to silica gel. These materials have the ability to remove metal ions selectively from aqueous solutions. Chelating groups can be covalently bound to polyamines that have been grafted onto a silica gel surface producing a material of greater mechanical integrity. Silica gel is also combined with alkali metals to form a M-SG reducing agent. (See SiGNa chemistry)

Silica gel is not expected to biodegrade in either water or soil.

Silica gel is also used as cat litter,by itself or in combination with more traditional materials, such as clays including bentonite. It is non-tracking and virtually odorless.

Silica gel, also referred to as silicon dioxide or synthetic amorphous silica (SAS), is listed by the FDA in the United States as generally recognized as safe (GRAS), meaning it can be added to food products without needing approval. Silica is allowed to be added to food in the USA at up to 2% as permitted under 21 CFR 172.480. In the EU, it can be in up to 5% concentrations. In 2018, a re-evaluation by the EFSA Panel on Food Additives and Nutrient Sources added to Food found no indications of toxicity even at the highest estimates of exposure level.

Given the water adsorption properties of silica gel, it is used in domestic water filters. The surface structure of silica gel allows the adsorption of some minerals that are dissolved in the water,[17] or “Ion-exchange” as it is marketed. Due to the lack of regulations for domestic water filtration products, no studies validate the manufacturer claims regarding the effectiveness of the filtration system. 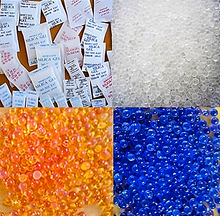 Silica gel may be doped with a moisture indicator that gradually changes its color when it transitions from the anhydrous (dry) state, to the hydrated (wet) state. Common indicators are cobalt(II) chloride and methyl violet. Cobalt (II) chloride is deep blue when dry and pink when wet, but it is toxic and carcinogenic, and was reclassified by the European Union in July 2000 as a toxic material. Methyl violet may be formulated to change from orange to green, or orange to colorless. It also is toxic and potentially carcinogenic, but is safe enough to have medicinal uses. A more ecologically friendly indicator solution is ferric ammonium sulfate, which results in a color change from deep orange/amber when dry to colorless/white when saturated.

Ecofarm Africa Connections is the leading supplier of Silica Gel in Nairobi, Kenya in the Kenyan market and across the borders. Call us today on 0714 690 266 to place your order.